Last week I showed you my first few new aerial Kualoa photographs I captured on Oahu Hawaii with my DJI Mavic 2 drone.

This week I will show you a few more aerial photos of the Kualoa Regional Park area; one of the most stunning vistas on Oahu island in Hawaii.

I showed you the shot above last week, but I’m showing it again to set the scene for you: this is the view looking from out over the water in Kaneohe Bay back towards the coastal mountains. We can see Kualoa Regional Park in the foreground with the spectacular ridges and cliffs of Kualoa in the background.

Now in the aerial photo above, I’m in the same spot, but I rotated the drone 180 degrees to show the view looking out to sea. That is Mokoli’i Island in the foreground with a nice Hawaiian sunrise in the background.

In the photo above, I flew past Mokoli’i Island and then turned the drone 180 degrees yet again, so now we can see the entire grand vista: Mokoli’i Island sitting offshore in Kaneohe Bay, and the fluted ridges of Kualoa lit up by the dawn’s early light.

According to legend, Hi’iakaikapoliopele, one of the Hawaiian goddess Pele’s sisters, was being chased by a giant lizard. She saved herself by killing it and Kualoa Mountain & Mokoli’i Island are what remain of its back and tail respectively.

Whether you believe the legend or not, the fact is that Kualoa is one of the most beautiful locations in all of Hawaii (and that’s saying something!)

For my final photo of this week, I’ve flown lower and closer to Mokoli’i Island to give you a true bird’s eye view.

Next week: even MORE of my new aerial photos from Hawaii!

Please remember that all of my photography is for sale as fine art prints and canvases. And if you’re an art director or photo editor, you can license my work for your commercial or editorial project. Contact me for more information, or go to my web page; markjohnson.com.

Until next time, Aloha, 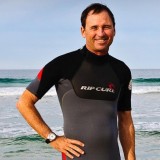 My name is Mark Johnson, and I’m a professional ocean, travel and adventure photographer. As a young kid, I started surfing at Kailua Beach in Hawaii, and as I got better, progressed to Pipeline and other North Shore spots, and then to surfing on Kauai and around the world. I live in Australia, and travel to Hawaii each year.
From my early teens, when I started shooting surfers and waves, I was in demand by my fellow water lovers, and when my first photograph was published in Surfing at the age of 18, my work was also sought after by photo editors, art directors, and regular folks who bought my fine-art prints. I’m far from only a surfing and wave photographer; my love of traveling and nature has allowed me to branch into those photographic realms as well.